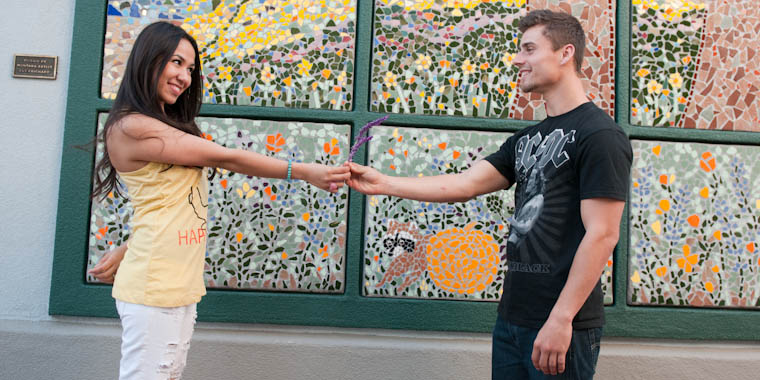 They met at In-N-Out. She was a manager and he was the dashing new recruit with the piercing blue eyes. Before long they fell in love. That was two and a half or three years depending on whether you’re asking Bryan or Sendy.

Right off the bat, I could tell they were a good match: She was organized and asked all the important questions. He was mischievious and made some very zany requests (see broken guitar below!) Together they finished each other’s sentences.

I left our first meeting with the impression that it wouldn’t be difficult to capture Sendy and Bryan’s love and affection for each other. This turned out to be true.

The engagement session started out in downtown Half Moon Bay. It was my first time there and I was amazed to find so many interesting little alleys and beautiful murals in such a small area. 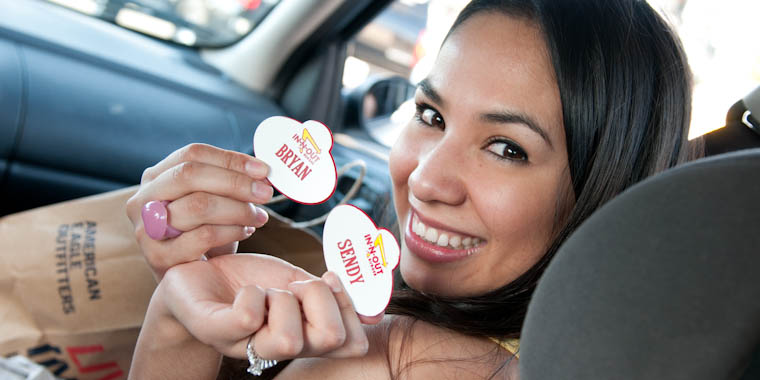 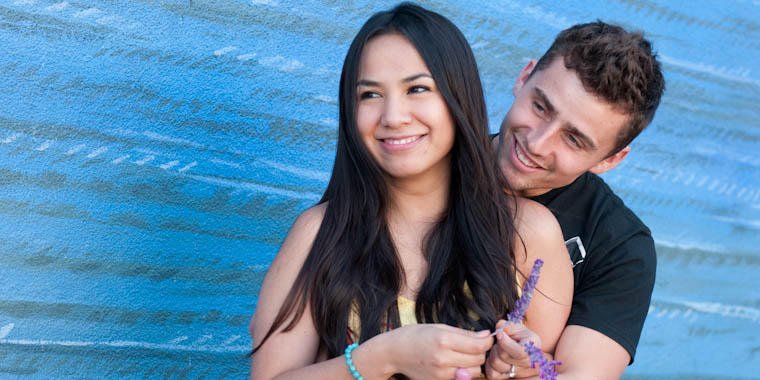 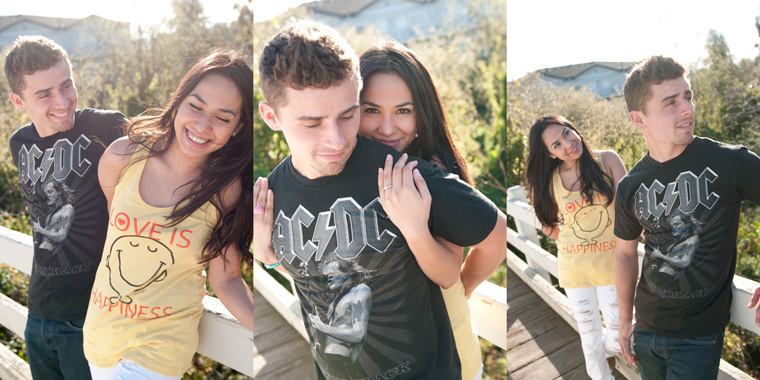 It took several breaths, but they eventually blew the seeds off the dandelions. 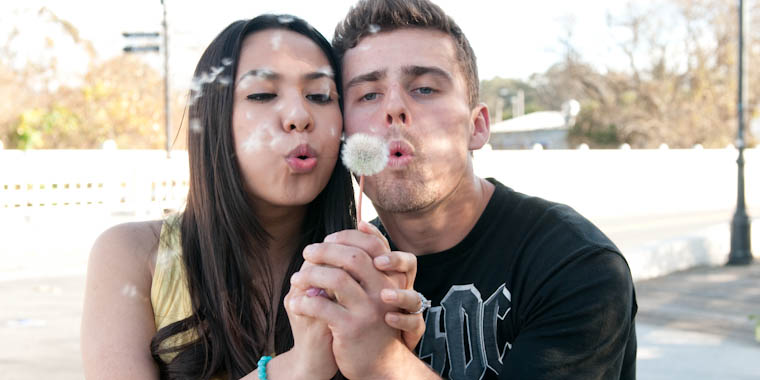 After spending an hour downtown, we moved over to a nearby beach. The sand, the skies, the sun…it was all gorgeous! 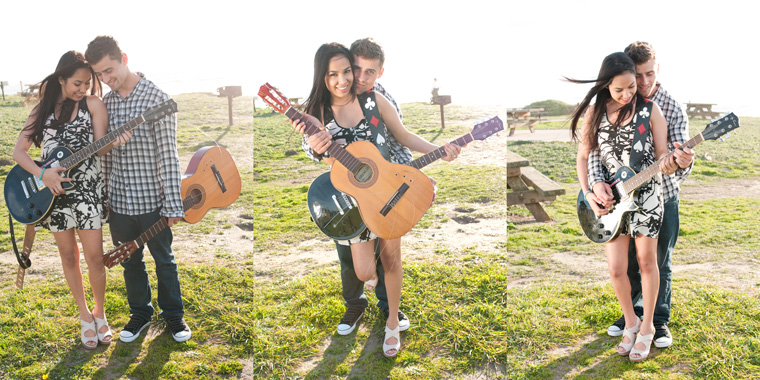 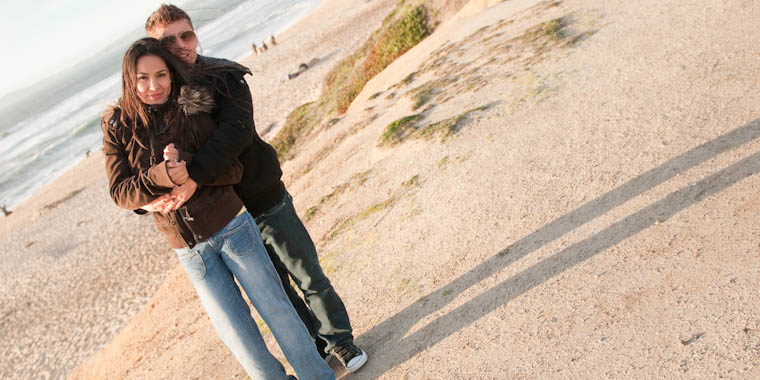 At our initial meeting, the first thing Bryan asked me was, “Can you get a picture of me breaking my guitar?” Caught completely off guard, I gave him a quizzical look and asked, “Ummmm, what does that have to do with your engagement?” My next thought was: now this is an interesting guy, I think we’re going to create some very cool images together! Having never seen someone smash a guitar, I jumped at the chance to try it out. I made sure it was one of the last things we did on the beach, just in case the police booted us out for disorderly conduct! 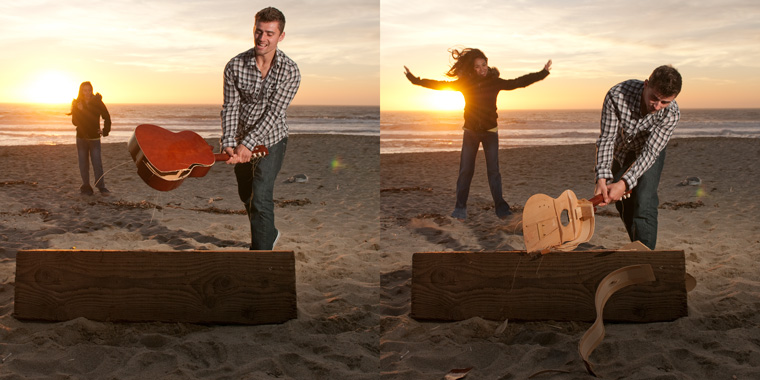 By sunset we were all shivering from the famous winds of Half Moon Bay. Guitar smashed, we picked up the pieces, grabbed our stuff and started hiking back. “Wait! Can we shoot the chocolates?” asked Sendy. Never one to say no, I snapped this and a few more shots before the sun disappeared. Thanks Sendy for the awesome suggestion! 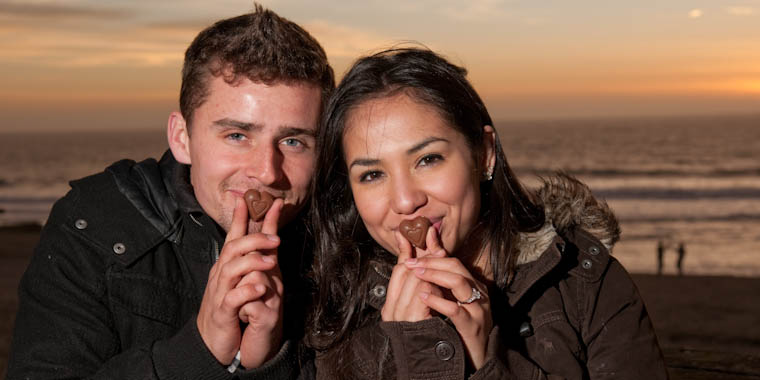 Thank you Sendy and Bryan for being such great sports! Though it was freezing and the wind was merciless, you guys really gave it your all! I also want to thank my buddy and fellow photographer Brian for taking time out of his busy weekend to help me out. His advice, ideas, off-camera lighting prowess, and hard work is always greatly appreciated! Sendy and Bryan, I am really looking forward to your wedding in Burlingame. We’re going to have even more fun together!